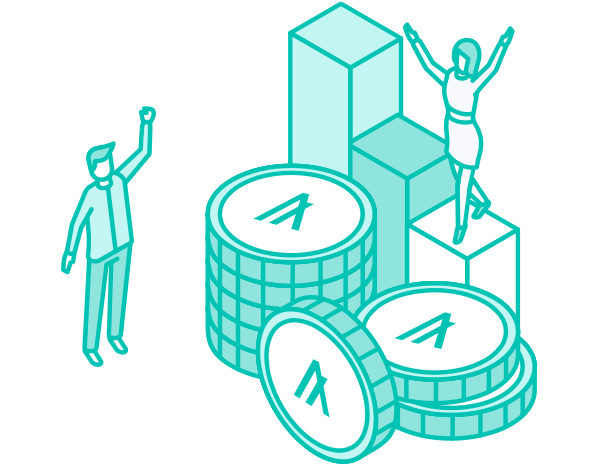 The Algorand blockchain network has its own native cryptocurrency, the Algo. At the genesis of the Algorand blockchain, 10Bn Algo was minted. As of March 31, 2022, the circulating supply is more than 6.7B Algo, distributed through different forms of ecosystem support and community incentives. The remaining part is held by the Foundation in secure wallets with the following composition:

This page reports the dynamics of the Algo circulating supply from the genesis block. The distribution of the resources is regularly communicated to the community through our semiannual Transparency Reports. Following the above allocation, the distribution has the main purpose to support the development of the economic ecosystem built on the Algorand public platform, and to reward the participation of the Community to the Algorand Decentralized Governance and the contribution to the economic network activities.

The Foundation’s role is fostering the growth and the decentralization of the ecosystem. The relevance of Decentralized Governance in leading the distribution is increasingly growing. Governors have already voted to decide the balance between the level of their rewards and their commitment, and to set up the different requirements for governance and the different roles.

For the initial period of Algorand history, the distribution was based mainly on a number of different ecosystem programs, such as universities and grants, and on algorithmic rewards to community, early backers, and network service providers. The main goal was decentralization and inflation control. More details are given below in the original Algo Dynamics plan published 1.5 years after launch. The main aspects that have evolved since then are:

Over the first 1.5 years of Algorand’s existence, the Algorand Foundation has analyzed the Algo dynamics and has listened to the community. Based on analysis and feedback, the Foundation has built a long term program that will support the adoption of the Algo, drive even greater innovation on the Algorand protocol and contribute to business and social good projects that will advance the economic relevance and the inclusivity of the Algorand ecosystem. Importantly, the program will also contribute to the decentralization of decision making and governance on the blockchain - a goal long valued by Algorand and the community.

Consistent with the reduced rate of supply distribution implemented in 2020, we have extended the distribution of the fixed and immutable total supply of 10bn Algos from 4 to 10 years from now, ending in 2030, rather than in 2024 as initially planned.

Following the spirit of Silvio Micali’s proposal on innovative community governance, we are moving from the initial reward design, aimed to benefit all participants to the Algo network in the initial phase of Algorand, to a new reward system benefiting the participants, existing and future, who commit to participate in the governance of the ecosystem and prove their commitment by locking their Algos for a potentially long term. Long term commitment is necessary to align incentives, since participants will have a crucial role in allocating funds to different projects that unfold over an extended period of time. Thus, the level of these rewards will be very competitive, as detailed below. This will happen through a balanced and prudent transition process from current to future rewards and is going to have an important, positive effect on tokenomics.The shift from current to future reward design will be implemented through a balanced and prudent transition process and is expected to have an important, positive effect on tokenomics.

Algo tokenomics will also benefit from the precise allocation of the funds originally slated for sales and that have instead been ultimately allocated to efforts and areas such as community incentives, governance participation, and ecosystem support, giving certainty and predictability to the Algo tokenomics, and always with a rate of distribution planned to avoid inflation and maintain scarcity.

The Long-Term Program encompasses also a new  Ecosystem Support Program. This 10-year program allocates resources to be gradually distributed to incentivize long term holding and economic and business activity on the blockchain, with the purpose of achieving a rate of growth of chain loyalty and economic adoption more than sufficient to compensate the gradual diffusion of tokens associated with this 10 year plan.

To help the community fully appreciate the change, as we move from Initial Algo Dynamics to Long Term Algo Dynamics, we present how the initial allocation of the fixed, total supply of 10Bn Algo has evolved. At launch, we published a preliminary distribution plan for the total supply of Algos, a fixed and immutable quantity of 10 Billion minted in the genesis block…..

…. where the amount initially held at the Foundation for market injection, and for discretionary usage of Algo, was to be allocated over five years (ending in 2024) and reached a total of 3 Billion Algo.

The new Long Term plan shows how the 3Bn Algo will instead be devoted to rewarding participation, usage, community governance, and service to the blockchain, while developing the technology and businesses running on the blockchain, so removing market uncertainty potentially surrounding the usage of this 3Bn Algo.

This is an important improvement of our economic structure, giving a further benefit to our tokenomics in the movement from the Initial to the Long Term Algo allocation: the majority of Algos devoted to Ecosystem Support will be moved, in the form of a locked stake, to partners that will be universities, institutions including investment funds, and companies committed to the ecosystem governance and consensus, obtaining:

By building this 10-year program, the Foundation is providing clarity on how the outstanding supply of Algo will enter into circulation. By 2030, the Foundation expects over 99% of all Algo minted at Genesis to be in Circulating Supply according to a non-inflationary distribution rate. The “Circulating Supply” is the total supply of Algo that is available on-chain without contract restrictions. It is defined as the Total Supply less tokens held in restricted wallets (future vesting of rewards, future grants, participation rewards pools, contingent incentives, etc).

The paradigm we will follow in the 10-year Plan is diffusion of the Algo with gradual creation of long term digital scarcity. The diffusion has been planned to be faster when an even faster activity and economic development is expected. This is detailed below.

For the 2.5 Billion Participation Rewards, of which 300M have already been distributed, the distribution plan aims at keeping rewards competitive in the next few years, while letting digital scarcity kick in later.

For 2021 and 2022 the Foundation has allocated an amount of Algos to Participation Rewards which is around 8% of the pool receiving such rewards, which translates into a reward potentially much higher than 8% for those committing to participate in governance and lock their tokens for a longer term.

When the rewards total annual amount starts decreasing, we expect the difficulty of the services required to receive rewards (participation in governance and associated commitment) to increase, reducing the pool receiving rewards while keeping rewards competitive as a percentage of the size of the receiving pool.

The 1.25 Billion Algo allocated to Ecosystem Support will be locked and distributed over 10 years at the rate of approximately 10% per year. In the next months the amounts will be allocated to new and existing partners (decentralization) but will remain locked and gradually released via smart contracts.  This will ensure that the release required to raise the funds supporting the ecosystem is smooth and non-inflationary. Because of the gradual decentralization of the funds, we expect that the implementation will be 60% at the end of 2021 and growing to reach 90% in the following three years. This will make the distribution sustainable and non-inflationary. In fact, the distribution will be lower in the first years and larger in the last ones, balancing the reduced distribution over time of the participation rewards.

This distribution achieves a slow gradual release in the first years and subsequent increase in the rate of distribution more easily absorbed by an already large and developing market, supported also by the economic activity fueled by the Ecosystem Support Program itself.

The Ecosystem Support effort shows different categories. Let us add some details about them:

In the chart, we show how the initial distribution to Relay Nodes would have resulted in a significant spike in supply between 2020 and 2021, while the market was immature. EIP-11252019AF was proposed by the Relay Node community as a solution to this problem and the vote on this passed, bringing our current distribution plan into effect. The distribution of Contingent Rewards to Super Staking Participants and to Relay Node Runners affected by EIP-11252019AF was part of the same process of economic reform.

Some of the buckets in the new allocation require some further details: